Rule 1: If pollen isn’t coming in… then either scouts are visiting, and they can visit in large numbers, or it is being robbed.
Rule 2: Don’t seal up or spray a beehive unless you know the specifics of what is going on inside. If you do either of these, and there was an active colony inside, the bees will look for another way to get outside – which is usually through the inside of the home.
Rule 3: If bees have been there before, they either never left or are returning due to location or scent. Find out the history of the area in question.
Rule 4: Once bees are in a location, it can take a bit of time to relocate them, so plan accordingly.
Rule 5: A swarm is a ball of bees with a queen or a cloud of bees with a queen. A colony / hive is a structure where the queen is inside and laying babies. So if you say you have a swarm in your wall, that is not true.
Rule 6: If honey is leaking out of the hive, something has gone wrong with colony.
Rule 7: Trap outs are time consuming and are the least effective way to remove a colony. Trap outs primarily thin out the old field bees, not the queen or nurse bees. The field bees have less than 2 weeks of life left in them. Do this only when you can’t remove the bees and you want them to use up their resources prior to a kill, to prevent honey leaking later.
Rule 8: Brood or babies are in the most protected area of a hive. If you only remove honey, then the colony and brood nest is still there.
Rule 9: If you ask, “is there yellow on your bees”, and they say yes it isn’t a honey bee. Honey bees are brown, no distinct yellow.
Rule 10: The bees need a cavity the size of your torso. Typically the bees do not contend with insulation. They will remove insulation and styrofoam. Bees typically don’t live in the ground, but can live in rock cavities.  Honey bees will not live in old railway ties, as the space isn’t big enough and they hate the kerosene the ties are soaked in.  Remember, bees smell parts per billion.
Rule 11: Colonies will naturally swarm off to regulate the population, so if there is a colony that can’t be removed…place a bait hive 25 feet away to capture them.
Rule 12: Baiting a box for a swarm isn’t done with food or honey, this only causes a looting / feeding frenzy. Use scents such as beeswax, propolis, queen pheromones, or lemongrass.
Rule 13: In removing the colony, harvest the honey and take the eggs and larva and rubber band them into a new frame with the bees from that colony. If the queen died in the removal, the bees will make a new queen from the resources you provided. 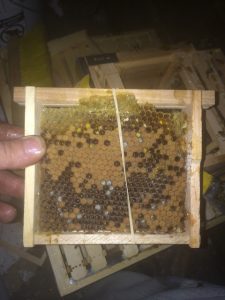 Rule 14: Be prepared with tools, beehive equipment, suit, vac, and camera. Use a lift any chance you can instead of risking your life and health.
Rule 15: Don’t place this removed colony near other domestic colonies until you have had a chance to inspect for disease.
Rule 16: In removing a bee colony, try to plan on the least intrusive access. Cutting brick, vinyl siding, drywall, stucco…will all cost lots to repair. If bees are flying inside the home…turn off lights, make it as dark as possible, then open a window with full sunlight. Bees will fly right out.
Rule 17: For colonies that can’t be removed, like chimney hives, or that are hard to reach, or extremely costly to access, bait the feral colony entrance with honey. Smear the honey all over.  Place a very strong colony nearby to over-power and rob the stores.  This can be done in a short period of time. After a month, seal it up.  Wax moth will devour the remaining drawn comb.  Know that bees wax is bee fat, and many little creatures that crawl, are excited to eat it all up.
Rule 18:  Be careful not to have honey dripping out of the new hive, as it will induce robbing.  Anytime you inspect a colony and you damage comb where it is leaking, you pose risks to the safety of the colony by robbing.  Robbing can be by insect, birds, rodents, and large animals.
Rule 19:  Never assume you removed everything, until you have checked the spaces on all sides of where you removed from.  Even when you remove all the comb, bees can move to stay out of the expert’s way.  Look to make sure everything is gone.
Rule 20: A thermal imaging device can be extremely helpful, but does has limits.  If the hive is being robbed, the thermal image it will show heat during the day, but nothing at night.
Rule 21:  Always be safe.
Rule 22:  Get signed wavers prior performing any work.
Rule 23:  Disease is always a concern.  Once relocated it is best to medicate as the bees are very stressed.
Posted in Uncategorized and tagged advanced beekeeping, Chubak, removal, Utah Bee Removal.