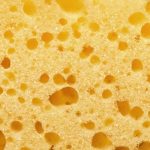 A challenge in beekeeping many can relate to…which hole to stop first?  “If it isn’t one thing it is another” is the adage that some say with regard to how to keep honey bees alive.  Honey bees are “livestock” and as such, there is an unseen and visible world threatening them daily.  Each year lessons are sadly learned as a result of mistakes, both intentional and unintentional.  These lessons vary from apiary to apiary, hive to hive, and beekeeper to beekeeper.  One apiary may not have one issue yet another apiary is overrun with a threat.  One colony may appear healthy yet the one inches away is looking towards that “heavenly light at the end of the tunnel”.

No one can say, “if you learn this…you won’t fail as a beekeeper”.  Truth is everyone fails, it is how each recovers from a failure that varies.  Many chalk it up and say, “damn it, I am done”.  Others say, “I’ll buy another package next season”.  The list continues, “I’ll try a different queen type next time”, or “I’ll find a mentor”, or “I’ll take a class”, or “bless this hive dear God that I don’t kill them again despite my ignorance”!  You will though, colony after colony will fail and each time is a learning experience you can share or file away. 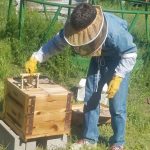 Another challenge is a tough piece of meat to chew on, “it seems that another beekeeper knows nothing and does little and his little nightmares survived”.  What gives? 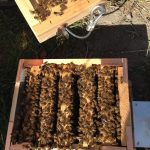 Over twenty years these eyes have watched over colonies.  Death has come to many colonies, swarms, yards, by everything imaginable including a bulldozer!  It truly is depressing when an entire apiary is destroyed, but it happens far too often.  Some are loaded on a thief-mobile and roll away your world.  Some are turned into what looks like a child’s domino collection after a day of uncontrolled play-time.  Whatever the challenge another will mount its horrific face and shout “boo”!

What can be said to alleviate the failures?  The answer is an obvious one and it isn’t to take up another hobby like fishing.  Sustainability in beekeeping is elusive but it is the answer.

Buying a package of bees is like going to a nursery and acquiring a seedling or “start” all ready to plant.  It takes little or no insight of the gardener as to what it took to get it to that tender size.  All that is hoped is that it is matured enough to survive despite what nature throws at it and what is done or not done after arriving in your garden.  It is hoped that seedling is “hell-bent” on life so all you do is give it space.  A bee colony is similar, many buy a package of bees with an unfamiliar mated queen in hopes the two will learn to love each other as a 21st-century family at least.  Sometimes this “match-maker” style of union fails.  At that point, if caught soon enough a new queen can be purchased from a “royal queen maker” and again introduced like “Snow White” in hopes of the loving kiss.

The key above is the availability of a new “Snow White”. 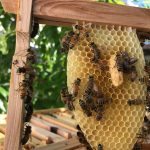 Sustainability comes from understanding how to create a colony from a fertile seed (egg).  Printed in the genes of each bee is a list of instructions of what to do when a problem occurs.  One of the ancient instructions is how to create a new queen.  A queen can lay thousands of fertile female eggs a day which could ALL become a queen under the right conditions.  The instructions they follow are simple when the scent of the queen disappears the nurse bees, or the ones feeding her and attending to the young, innately decide to keep feeding the tiny larva royal jelly.  From 3-5 days after the queen goes missing other replacements are started. The DNA instructions cause young bees to assess the cell length and extend it downward only for a future queen.  Once the larva has aged and grown to about day 8 these amazing insects cap the cell and protect it from all outside variations.  This “princess” is now incubating.  Once she has developed into adulthood this maturing teenager wants to tackle the world.  She fights her way out and then dries and her chitin armor hardens.  Again, back to the “instructions”, once she is perfected the senior ladies of the hive kick her out into the world and escort her to the local drone hang-out (Drone Congregation Area or DCA).  She may return or she may die, so others were prepared along with her and they too are sent off in hopes of finding lucky boys (drones). Each area hopefully has a drone hang-out where they seek out their princess.  All the effort of the successful drones ends in death.  The newly mated queen returns and if mated enough she begins her mission in life to lay eggs and build a colony. 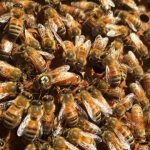 The baffling question many ask is, “how do I raise a queen”?  Not much has to happen other than the queen being removed and there being “young open brood” and resources such as “nectar and bee bread”.

Mating nucs are quite small, like a single box Mini Urban Beehive (MUB).  This tight confined area is suitable for a small cluster of bees to make a new “Snow White”.  They need resources at their disposal, such as honey or sugar water (suggest adding a supplement to sugar water increasing life-supporting nutrients), and protein for use in making “royal jelly”.  Water needs to be available so the bees can increase the humidity and maintain the perfect temperature with their wings and aerobic generated body heat.

By having an understanding of how bees make new queens, the lesson on how to grow a colony emerges.  It is insightful and valuable to have a second hive or a colony in waiting to take resources from to support another failing or less successful colony.  Not much is needed when a queen has disappeared and the colony is “broodless”, the beekeeper only needs to add a frame of young open brood and they will take care of the rest.  3-5 days later queen cells appear and the cycle starts again.

Many don’t have a second colony or access to an open brood frame.  That is like having a house without an insurance policy.  Something happens and without insurance, it becomes a total loss or nightmare.  The second colony does not have to be huge, nor does it have to be heavily populated.  A small Mini Urban Beehive (MUB) in a single box can supply a queen to a larger colony and the small MUB/Nuc goes and regenerates a new queen.  If the little MUB colony grows to fill the 4 boxes, extra brood frames from the MUB can be added to the larger colony so it grows even faster – “a separate 2 queen system”.  This can be achieved by adding mini frames with wire or zip-ties inside a deep frame or simply adding a 30 frame comb box to an existing hive.

Any failure can be overcome if another colony is available.  Some use a second deep Langstroth colony for regeneration. Sharing deep frames takes away growth from the large growing colony and if the failing colony still fails then the entire huge frame was lost in the process.  A tiny mini frame of open brood the size of a palm is all that is needed.  If there are eggs still on that brood frame, it will be okay.

Small colonies are quite enjoyable to maintain and grow.  Their temperament is docile due to the need to regenerate a queen for survival.  This permits time for the beekeeper to learn and see what happens and the length of each cycle.  This is a valuable lesson in beekeeping that should NOT be missed.

Raising queens can be complex or simple depending on how many are wanted.

This is the key to sustainability, the ability to recover from the beginnings of failure.  How many colonies could be saved if available resources were near?  Most problems can be rectified before loss sets in.  Another valuable asset of the MUB is its size.  A large box can be too big for a tiny colony to grow in.  Remember this colony has to control its environment to succeed.  Too big of a space and these little ladies cannot maintain humidity or temperature for growing their youn