These are the standards we are taught:

Problems with above points
There are problems innate with the above points.  Deeps are heavy, and take time for the bees to build up.  Limited to 10 large frames per box, and primarily for the bees, so the value to the beekeeper is zero until honey is produced above them.  Plastic foundation limits removal of queen cells when they are produced. Additionally bees dislike plastic.  Bees also want and need drones, yet it is restricted.  Most beekeepers are taught mites incubate with the capped drone larva… so they avoid having them. Pushing the bees back down onto the oldest most infected comb every fall is another unhealthy practice.  Bees want to swarm 3-5 times a year, but beekeepers obviously manage against this. Mites and other attacks on the colony are always an issue, thus chemicals are added to help fight.  The lack of natural queen rearing basics is often the downfall of a beekeeper.  Wintering colonies in double deeps is also a standard many follow, however if the bees do not fill the boxes, only one deep, then many times the bees will fail due to the frames being too large and prevent the bees from rejoining the cluster.  Bees share heat through the frames, but are unable to leave their radiant heat source.  Even though honey was inches away, they starve.  Subsequent failure dominoes from from frame to another, until the entire colony is dead.  In spring, starvation appears to be the problem, yet honey was abundant.
We are not attacking Langstroth – just deeps for backyard beekeepers
So now you might ask,..”okay, what do we do differently? ”   Some will become defensive and defend the Langstroth methods, but we are not attacking the Langstroth method, just the deep brood boxes for backyard beekeepers.  We realize honey is the carrot for the beekeeper, but so should healthy bees be.  Too many new beekeepers come into our store and say they want to be a beekeeper and want lots of honey.  Honey is the bi-product of successful beekeeping.  First learn to keep the bees alive and healthy, then honey will follow.
Swarms into a Mini Frame Comb Box
We have gone entirely to using medium Langstroth boxes with mini frames as brood boxes for our apiaries.  They are more than brood boxes though.  This is where the fun begins.  In 2015 Albert Chubak placed a 3lb package into the 26 Frame Comb Box.  The bees built out the medium within the month and were working on the second box.  The other test was placing a swarm into the same box.   One swarm filled three boxes initially, another swarm filled a single box in a week with 100% newly drawn comb.  Of these two hives, Albert Chubak began harvesting honey a couple weeks later.  Each frame that was filled was removed and bagged and sold, for $20 each.  A 26 Frame Comb Box is worth $520 if sold for $20 a frame.  Three medium boxes are the same as two deeps, but clearly the value is much higher. 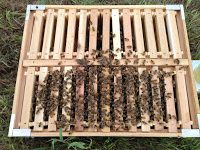 Starting Nucs with the Mini Frames 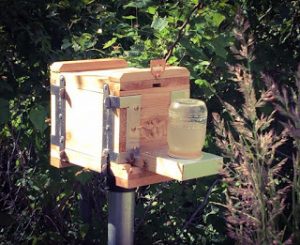 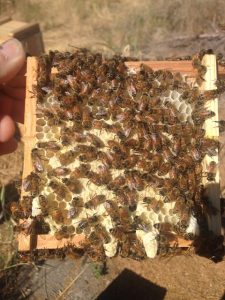 We also remove sets of two frames of eggs and larvae with the nurse bees to start new colonies.  This new two frame colony then goes through a period where they rear their own queen, thus breaking the brood cycle, which also breaks the mite cycle.  Breaking the mite cycle is a major plus.  This separation of frames is also imitating the bee’s natural instinct to swarm.  In a three box medium we started over 20 new colonies, and instead of them getting bigger we separated them into 2 frame nucs.  A 2 frame nuc rears their own queen without much help of the beekeeper.  The beekeeper does have to supply supplemented feed, and protein patties.  We get honey from the part of the season it was made.  If we move the hives, we get honey immediately from the area we move them too.  We get a supply of brood to make new colonies with, or a new supply of queens.
Drones
Every area will be different in regards to how many drones exist.  Most urban centers have enough bees – feral or otherwise, that supplying drones isn’t an issue.
Mini Frame Comb/Brood Box Harvesting Like Checking for Eggs with Chickens
This hive is quite versatile and we never have to have more than 3 mediums.  Honey will show up in the front and rear, and top.  It is like checking for eggs daily, we look to see how the frames are coming along.  If mostly capped, it is ready to go.  Some clients prefer the completely uncapped nectar frames, these need to be refrigerated. 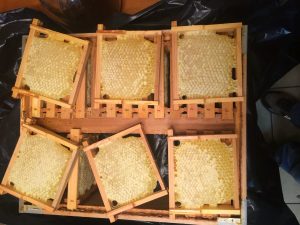 Comb Honey vs Bottled Liquid Honey
We sell all the comb honey we produce, and sell for others that bring it in.  When a customer learns how easy it is to extract (simply place comb in baggy, squish, let settle, pop holes with toothpick in bottom of baggy, let leak out), they have no qualms about trying it.  Liquid honey has risks of contaminants such as additives (syrups, flavor, water), larvae juice, unsterilized equipment, etc.
Selling Comb
Each beekeeper can decide for themselves if they want to sell the frame and replace it, or cut it out and replace the frame into the hive.
Posted in Uncategorized and tagged beekeeping, Chubak, comb box, comb honey, queen rearing.