About three years ago we met a wonderful lady from Boulder Colorado that purchased some of our copper brackets.  She was the first person to make an order for our deluxe copper pieces.  We had asked if we could get a photo when it was done, and this was the masterpiece.

We wanted to know what she did to her pine panels, as they looked better than plain pine.  With her artist touch she used black tea to add color/highlights, and a wax blend to coat it with.  Her organic recipe intrigued us… and this was the beginning of Beck’s Bees Wax.  It is made with 4 ingredients: Bees Wax, Coconut Oil, Canola Oil, and Lemongrass Oil.

Over the years it has been modified slightly, but has remained relatively the same.
This amazing product has many uses besides coating the exterior of a beehive.  It can be used to coat leather, such as gloves and boots.  Prior to using beekeeping leather gloves, rub this on the leather like you would your hands.  Now when they get dirty they are easy to clean and remain soft.  Another friend is an avid snow boarder, and he uses Beck’s on his snow boarding mitts.  We know several message therapists that use it for clients.  It also works wonderfully on diaper and skin rashes, and on.
Not long ago Albert Chubak had a beautiful lady come over for a date, they talked and played old music and he introduced her to Eco Bee Box’s shop.  In the tour, he gave her a tin of Beck’s Bees Wax.  They talked for hours and sadly the date ended.  The next day he was excited to receive a text from this lady, and her comments were “I love the lip balm, my lips have never been so soft”.  Sadly he never had a chance to test her conclusion, nor did he have a second date!  LOL A year later he texted her and funny that she still remembered him as the lip balm guy. Oh well…the struggles of being a guy.
So…back to the Beck’s Bees Wax.  It comes in a 4 oz tin with a large mouth opening.  To apply it to the exterior of a beehive, use a finger nail to scrape backwards and it softly builds up on the nail.  Then rub it onto the wood, being careful not to get slivers.  Once all coated it can be placed into the oven on low for 10 minutes or until it turns shinny.  Pull it out and rub it with a piece of paper towel, and now it is water-proof.  We have also used a plumbers torch, but it can burn the wood if the flame remains in one spot too long.  Practice first is our recommendation.  Or, you can place it in the sun on a hot day, and that will work too.
Even though the beehive is coated and water-proof, the wood is still allowed to wick moisture from the inside where the bees are creating lots of moisture out the end grain on the outside.  The natural thermostat of a beehive is the end grain.  Water absorbs into the wood and follows the grain and evaporates out the end grain.  The common place for a traditional beehive to fail is the corners, why? It is because this is where all the moisture ends up, thus rusting  fasteners and staples.  With Eco Bee Box, the fasteners hold the lumber like a teeth in a jaw, whereas the tradition dado corner is held like a pins into a pin cushion, once the wood rots a bit around the fastener, it gives way and the box begins to fail.

A fun test with Beck’s Bees Wax and other lip balms and cutting board waxes…put some of the product on your lips, and wipe if off with a paper towel.  Look at the towel and see if it becomes transparent.  Beck’s Bees Wax leaves a shimmer on the towel, whereas other products absorb into the paper and turn transparent. 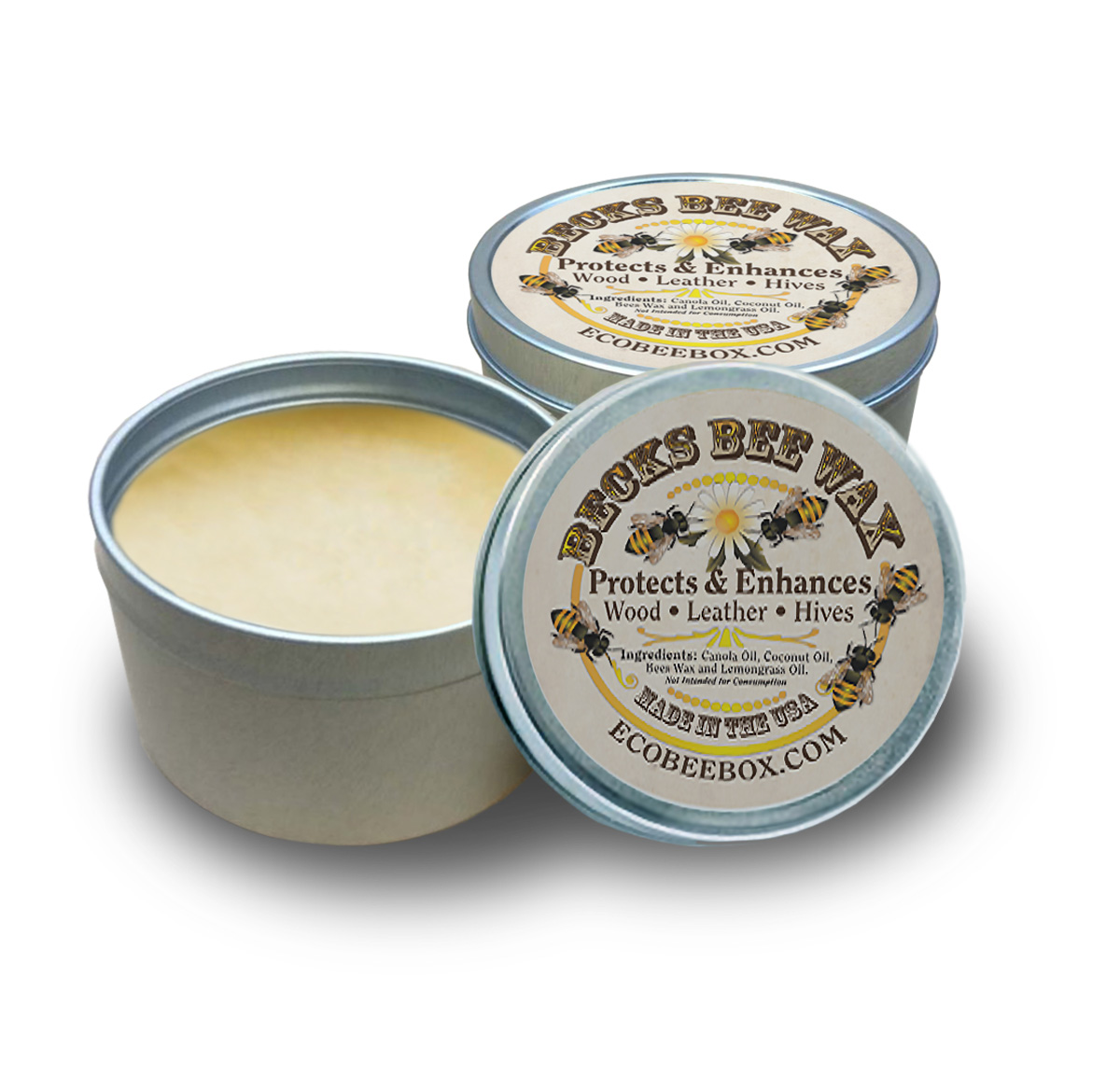