In 2013 David Bench and Albert Chubak were working in the bee yard and had decided to replace a number of queens.  They purchased replacements and had them ready to be placed in about 20 hives.  At that time Eco Bee Box had just developed a true 1/2 shallow nuc box (8 1/8″ x 20″ x 5 5/8″) with an inset window.  The last failing queen was saved and placed into this special nuc box, which held 13 mini frames instead of 4-5 long frames.  Two frames were set with drawn empty comb with elastic bands.  They took one deep frame from a standard Langstroth hive covered with nurse bees and brushed them into the nuc with their queen.  A feeder bottle was placed on top and it was given its own place in Albert’s bedroom window.  The entrance was on the outside with the observation window on the inside.  For one week Albert checked on these little critters noting they built a comb and a half a day.  On the following Friday after work, with his flashlight in hand, he saw for the first time a queen laying eggs.  On day 8 it appeared the nuc was ready for an inspection.

After that inspection, it occurred to them the queen wasn’t failing, it was the colony.  Another brood cycle was inspected and shortly the cells were filled again prompting the addition of another box.  Once the second box was filled the queen was returned to a standard deep hive.

After 7 days Dave and Albert again decided to see what their abandoned nuc was doing.  Should not have been a surprise but it was, they found that many queen cells appeared.  The thought occurred to see if each frame with its queen cells could be separated and allow the queens to emerge and successfully mate.  Fifteen mini hives or 1/4 boxes were built for the little frames of nurse bees and queen cells.  Over the next two weeks, all the queens emerged and went on mating flights and returned to subsequently lay new eggs.  They were so successful that David Bench began grafting and utilizing these mating nucs for the rest of the summer. 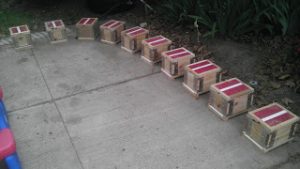 In fall, several queen daughters from an impressive swarm capture called the “grim reaper” remained.  This swarm had been the size of a person and had an eerie resemblance to the grim reaper.  Three of these daughters were placed into single 1/4 shallow boxes with honey and a top feeder bottle.  Displaced bees from the front of hives after harvest (they had no room in the hives after removing the honey supers) were added to the mini hives.  The mini hives were placed in a window well with access outside to see if they could survive the winter indoors.  In February all three mini colonies were still alive, and they were growing! 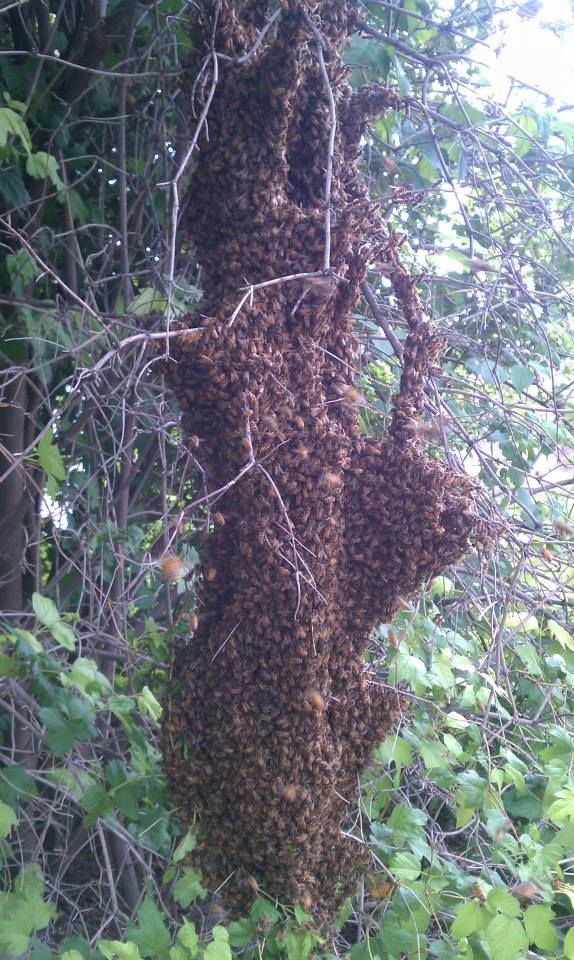 This swarm has the appearance of the “grim reaper” due to its shape.

In February the fun began.  Albert took one of the three mini colonies and placed it on the wall in front of the Eco Bee Box store.  He continued to feed them and watched them grow to fill 4 mini boxes.  Once the boxes were filled he separated them into 4 separate colonies. The bees raised new queens which each successfully mated, and each mini colony expanded to fill 4 boxes.  Luckily for this experiment drones were just being produced by feral colonies and commercial hives were returning from the Almonds.  Later they again grew and were split into 16 nuc colonies. This was before the commercial 3lb package pickup was available in April/May.  It then occurred that this may be a great way to teach new beekeepers.

Over the years both Dave and Albert have taught beekeepers to raise colonies from mini frames of open brood. In classes, Albert would initially ask “how many of you have raised a queen?”  Most beekeepers admit they have never raised a queen, but purchase them when needed, if they can find them.  This is a tragedy because if the queen fails with no readily available queen to be introduced the colony becomes a fatality.  Beekeeping is over for the season without a replacement queen for that desperate colony and beekeeper.  Albert suggests there are a few risks when purchasing a queen:

At this point, Albert began selling sets of frames with eggs, larvae, and nurse bees with available carbohydrates (sugars) and protein (bee bread/pollen) to new beekeepers ranging in age from 6 to 80.  They start a colony, but without a queen.  The first lesson these new beekeepers learn is how to raise a queen.  Feeding was essential, as was watching for robbing threats,  problems with the area, and being patient.  In 3- 5 days each beekeeper is to send via text an image of their capped queen cell.  If no queen cell appears, the beekeeper is asked to look for eggs.  Albert claims accidentally giving his queen sometimes occurs, but then his colony generates more queen cells and nucs for him.  It is a win/win.  In the case the beekeeper’s colony fails to generate a queen, which can be due to a host of reasons, the hive is returned, inspected, and a new frame of viable brood is added and subsequent attempts occur.  This allows for many learning experiences during the season with complete failure being rare.  The returned drawn frames are placed in a successful colony to have the queen refill the cells with new eggs. 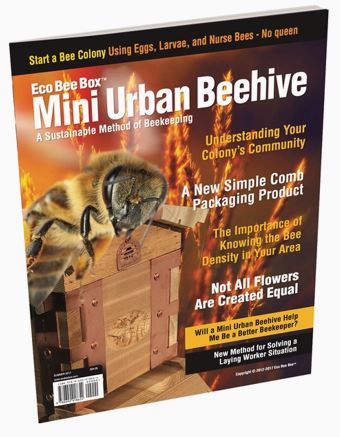 A beekeeping publication dedicated to “alternative beekeeping”. Many methods and hive styles are included with a focus on methods and applications.

From the one mini colony that survived the winter, Albert was able to create about 50 new colonies within the first season and the method has become a standard way he now teaches new beekeepers.

Since 2013 other uses for the mini hive and mini frames were found:

A series of “thinking outside the box” has evolved beekeeping into the Mini Urban Beehive and mini frame.