Honey has a magical property that few know. Want to know what it is?

Historically honey was used as was propolis in embalming in ancient Egypt. So what does that say? It aids in the removal of water from whatever it is with.

From the time the nectar is secreted by the plant and collected by the bee, it takes on the flavor of what it is with. Once the honey has been artificially dehydrated by the honey bee honey wants to naturally rehydrate. Essentially honey is “nectar jerky”. LOL. Nectar does not just become honey by itself, it has to be cooked, modified and worked by the bee. So…that is why “artificially” was used. Bees even add honey gut enzymes and pollen as ingredients in their ages-old recipe.

Years ago, Deven O’Reilly taught that if you take low moisture fruits or herbs and dice them up and place them into the honey…in 2 weeks you’ll have honey that tastes like that fruit or vegetable.

We tried ripe fresh juicy jalapenos diced up and placed into honey and in two weeks it was jalapeno honey WITHOUT THE HEAT, but all the flavor. 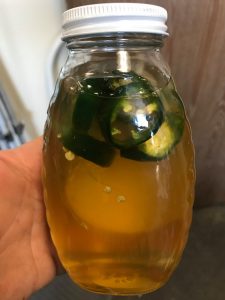 Tried garlic, as honey and garlic go nicely together with some meats, and it again worked.

We tried orange and learned it had too much moisture, so instead of the inside of the orange, we tried the peels. Sure enough, all the flavor of the citrus is in the peel and in 2 weeks it was citrus honey.

Tried a strawberry, but it had too much moisture.

Tried cinnamon and raisins but they had no moisture to transfer flavor.

Tried the peels of mango, peach, and other similar fruit peelings and it again worked. 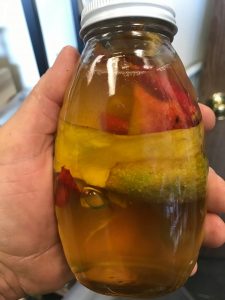 Currently, we are also trying a couple jars of honey with ginger. We’ll let you know what it is like once it is done. 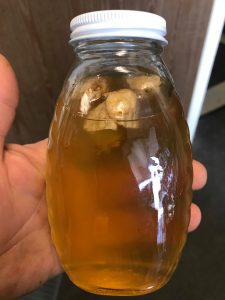 Honey with chunks of ginger root

Our favorite to date is plum. Last fall while at a job there were blue plums in the neighbor’s tree. We believe they were Italian plums.  They were fully ripe and falling to the ground. They were extremely sweet.  This led to a conversation with an elderly lady with a walker who owned the home. In the end, two buckets were picked, one for her and one for home.  She was delighted in a chance to have the fresh plums she has enjoyed for half a century. One of those plums was placed into a jar of honey. The dear plum was not poked, cut, diced, or harmed in any way. Now after months there is an exquisite jar of enhanced honey at the shop for visitors to taste. Of all the kinds of honey returned to the shop from all over the world…this is regularly the favorite. 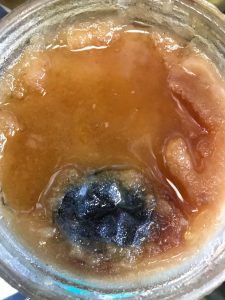 Mix in fresh herbs and you’ll too have honey with a unique garden flavor. If there is something you like, try taking some and placing it into honey and see what it becomes.

When it is done…you can remove the added produce or leave it for looks.

The trick will be to determine how much you put into a jar, as the honey will extract the water from the produce. Too much and the honey will have too much liquid and could eventually ferment. Fermentation will occur if the moisture is above 18%, but keeping it in the fridge will slow that process down and it will last a long time.

Another trick related to this transfer tendency of honey is for cleaning up honey. If you spilled honey or made a mess and want to save elbow grease, take a wet towel or hand-cloth and place it over the spilled area. The next day all the honey is in the towel and the clean up is really easy and mostly done.

If honey draws out water, the question we leave for you to think about…if you put on an absorbent patch over the skin laced with honey, would it pull out moisture or would the body absorb it in? If honey is placed on a sting immediately, will the honey from the bee rescue the one stung?

This and other great tidbits will be found in the next Eco Bee Box MUB publication.

Posted in Uncategorized and tagged honey.