Albert Chubak was called to inspect a beehive in 2016 because bees appeared to be under the hive, rather than inside.  A number of bait hives had been set up in the yard in hopes of capturing colonies swarming in the area. This colony moved in but missed the target, requiring beekeeping surgery to correct it.

Before going into how the bees were relocated to their intended destination, here is a list of rules to follow when baiting swarms:

Rule 1 – Do not have food stores in a bait hive, as this will induce robbing.  A colony wanting a home typically won’t move into a looting environment.
Rule 2 – Don’t leave beehives near your beehives unattended with food stores, as this will induce robbing by other honeybees and wasps.  Once the food stores are depleted, the robbers look for other nearby food to loot.  If you have a beehive within 15-25 feet, it will be tested and attacked once unattended stores are gone.
Rule 3 – For baiting a box, melt some old dark comb on the inside wall of the box.
Rule 4 – Don’t use a screened bottom as this article will show.  LOL
Rule 5 – Swarm lures will greatly help in drawing in a swarm.  A great product on the market is Swarm Commander.  It comes in a pump bottle and has many applications.  A mated queen placed into alcohol will work too.
Rule 6 – Bees always look for an area with a close water source.  They can travel miles for food, but if the hive is over-heating they need water immediately.  It should be an abundant source.
Rule 7 – For baiting, learn the area.  If there are many colonies in the area, they are bound to swarm or abscond at some point.  A responsible practice for beekeepers is to have a bait hive in their own yards to capture swarms from their own beehives when it occurs.  Multiple bait hives is like having multiple rods when fishing, more baits leads to more chances for success.  Most commercial beekeepers do not have any form of bait hives or swarm control.  Placing bait hives nearby is a ticket to success.  If you know of feral colonies in your area, place a bait hive nearby in spring.
Rule 8 – ALWAYS have frames inside your bait hive.  If the bees come and you are tardy in your visit, the bees can have it all built out and it will be a mess for a beekeeper to manage.  This article will show how to deal with the relocation of the free-formed comb.
Rule 9 – Inspect the bait hives for bees often.  In areas that have lots of swarming colonies it is highly recommended that the community place bait hives randomly to capture them.  Eco Bee Box has beehives that can hang from trees that can be baited and look attractive. 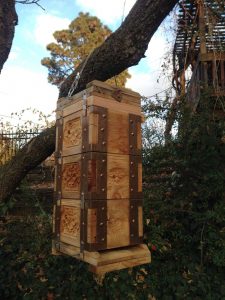 A Mini Urban Beehive can be an attractive feature in any neighborhood.

Rule 10 – If you don’t succeed, re-evaluate the location and try again.
Rule 11 – Some swarms can be the size of a softball, others the size of a full grown man.  Bait accordingly.
Now for today’s article.  Albert Chubak inspected a colony that appeared to have come in as a swarm.  This colony found a hive but it was being looted. The bait hive had a screened bottom, so the bees attached under it.  The right scents were there, it had protection from the elements, and a nearby pond, it was an ideal location for swarms.
What Albert saw was: 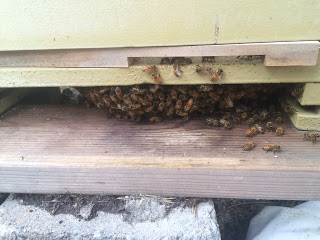 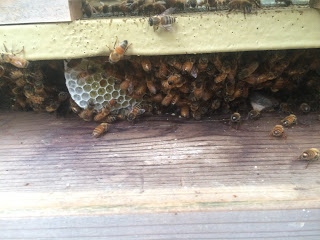 The bees almost hit the target, inches away. 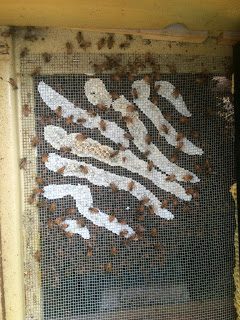 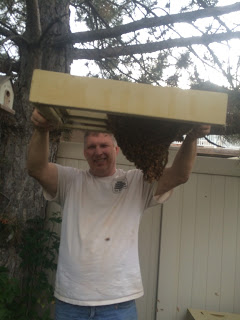 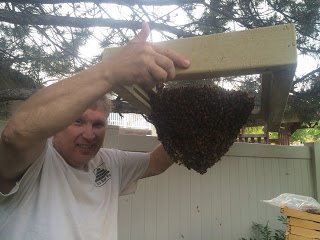 Obviously, there were no frames under the hive, so now the challenge was to move the cluster and the soft newly formed comb.  The bees already formed comb and had eggs and babies growing, but a medium or deep frame would be too big of an area to transplant the tender comb into.  The Mini Urban Beehive was brought in to help.  The comb was detached and reattached to the mini frames with elastic bands, keeping the comb right side up.  Once the comb was in the mini hive, bees were added. The remainder of the bees were transferred into their intended hive.

It is unknown which hive now has the queen. Whichever hive has eggs in 3 days is the hive with the queen.  If the mini hive has the queen, then in 3 days a couple of mini frames will be attached to a deep frame and introduced to the deep Langstroth.  If the queen is in the deep Langstroth hive, the mini already has the resources needed to make a new queen.  In 3 days another inspection will occur.  If the mini has queen cells in 3 days, a queen cell can be attached to a deep frame of drawn comb, insuring the Langstroth colony is okay too.